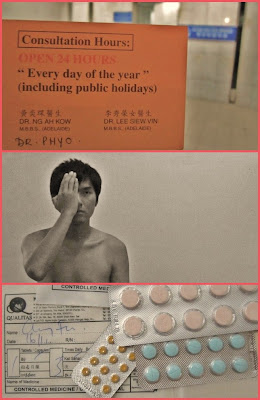 From Dr. Phyo to brain drain crisis.
Dr. Phyo, from Myanmar, speaks fluent English. He knows some useful words in Bahasa Malaysia as well, such as ada baik? (feeling good?), sakit (pain), ingat makan ubat (remember to take the medicine), rehat banyak (rest more), etc.
You may ask why i know Dr. Phyo? Actually i went to a clinic, it's apparently operated by Malaysian, however i was told by a nurse when she was handing me a medical card that the locum doctor of the evening was Dr. Phyo. The surname Phyo, sounds like Burmese, i knew it because most of my ex-workers at a construction site in Singapore were Burmese and Thais. So it was not a shock until i talked to Dr. Phyo and knew his nationality.
Disappointed to know that Malaysia has reached such a level that both foreign labours and expats are needed in the country. Disappointed? Why?? How come??? This is not a fact worth to be proud of. Instead, it's a shame. Shame because we have hundreds of brilliant students scored straight As every year but their ambitions to be a doctor smashed by the quota system set by the government. Most of them either couldn't get a place in any Malaysian university to study medicine or given other choices (engineering, bio-science, pharmacy, etc), have no choice but to accept other offers to study abroad. Many of these overseas qualified doctors are reluctant to come back serving the country. Eventually, the problem - shortage of doctors is getting worse until we have to import qualified doctors from our neighboring country, Myanmar. Sigh...
I am pretty sure the affected profession is not doctor only, we are, in fact, facing a severe brain drain crisis at the moment in all professional positions because i was just informed that few Malaysian teachers had decided to teach in Singapore next year. What's wrong? We can't close one eye letting this problem becoming worst. We really need a change!
p.s. : No worry i am 90% recovered. :)
Phyo醫生可以講一口流利的英文
他還懂一些簡單日常用的馬來語
爲何我這一次會去看醫生不重要
重點是他是一名緬甸的專業醫生
我國已到了需要專業外勞的境界
其實我國真的有很多優秀的學生
但他們始終還不能夠進入醫科系
大部分的優秀生外流到國外讀醫
就這樣我國面臨醫生短缺的問題
嚴重到要向鄰國的醫生招手問候
看來不止醫生這個專業受到挑戰
各行業的人才外流也不是新鮮事
我國簡直可以被形容為臥虎藏龍
擁有一個可以養育人才的大舞臺
舞臺經營者的無能緊逼人才跳槽
豐衣足食的大馬竟然面臨人才荒
需要引進大量廉價次等專業人才
這塊肥肉將會慢慢的被外人分割
不可以再閉一眼看待這個課題了
我們要一起站出來支持改朝換代
*大馬 = 馬來西亞
Tanjung Malim, Perak, Malaysia, 24/11/2011
Posted by fufu at Friday, November 25, 2011

Agree with you about the brain drain, but alas, not much is being done about it, is there?

Welcome back to Malaysia, Bro!

Hope you recover soon! Have a nice weekend!

Kenny : yeah another 10% to go and i can eat till i drop again lol yeah i read some article to solve brain drain problem... but not really very good ><

Pete : sigh wish after next election, such problem ca be solved :) hehe thanks! finally i am back~

and because our dear government never appreciate talents but quota and specific group of people, that's why we have the same amount of "exports" as the "imports"..

i wanna learn how to speak and write Mandarin or Japanese so that I can also have two different versions of language every time I make a blog post. lol

what kind of sickness did you get?

Frying fried rice over again and again without solving the problem. Should nip it in the bud than rather trying to lure them back into the country after they have left. Must not allow them to 'escape' the country with better incentives and fairness.