FuFu Travel Around The World

** Hey guys, FuFu is now travelling around Latin America, if you wanna see his latest updates more often, go to his Facebook --> Search Lam Ching Fu. Or click the badge below. Thank you. ** 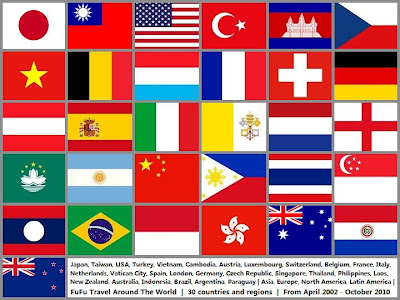 FuFu Travel Around The World

FuFu has visited 31 countries before turning 30 years old. Horray! Level UP. Next life target is to hit 50 countries by September 2011. Now left only Africa to attack. Then only can officially declare "FuFu has travelled around the WORLD" (Asia, Europe, North America, Latin America, Oceania, Africa, Atlantic Ocean, Pacific Ocean and Indian Ocean).

FuFu has decided to explore Paraguay, Bolivia, Peru, Ecuador, Colombia, Venezuela, Mexico, Chile, Argentina, and Uruguay end of the year. After going back to Europe, i will visit also Denmark, Sweden, Greece, Ireland, Portugal, Poland, Romania, Hungary, Croatia, Slovenia and other countries in Eastern Europe, as well as going to Egypt (the continent of Africa). Hitting 50 countries is not a big deal to a world traveller FuFu! LOL

Guess FuFu can get his life target easily accomplished. Would definitely exceed 50 countries when he is stepping into the new stage of life, starting everything from zero in his 30s. His life adventures and experiences are worth to be recorded down! Thus he would like to share them all with you guys here and also his personal blog. Please stay tuned for more! Allow FuFu to bring your eyes to see the world! Get Ready!

wow... so you've been to Philippines too..
oh my... you traveled so many places already you must be very rich huh
haha
have a great day fufu and happy blogging

u can achieve ur objective!!gambateh...

This is a feat man.

oh my~ so envious..
pretty good life n experiences...everyone would like it!!
gambateh with ur target!!:)

Fufu, let me know the date so that i could host you in Ireland. Well, i am heading to Swiss in the coming jan, for the ski and awesome country.

Should you make a song "Half around the world" ? Haha, dont forget i am behind you, travel to more places. But then, u started too earlier. haha ... Rmb give me some advise about the latin america when we meet again!

* "Half way around the world"

cool~ So admire you can go 50 place travel~
*envy

i wish i can be like u too! travel around the world n learning those cultures! ;)

africa...i wish to travel there too...but my friends saying me weird...maybe not much ppl wish to visit there...

i think u can archive ur target, i wish you can and i hope that you can...after u archive i can know you experience through your blog too...haha

I have gone to 31 countries too:

wow that's very cool that you've been to so many places!! i don't even have half of your count also.. :D keep it up, and share with us more of your travel stories in each and every place you visit.. :)

wohooo. You're the master traveler. You sure inspires a lot of people including me. Good luck Fufu.

Oh that is a nice list. I think I've visited over 20 countries but below 30. Hmm gotta do my own count of countries visited too. :D

I was wondering how you never been to Malaysia.. you were in Tanjung Malim, Malaysia. Oh.. if you ever need a place to crash in Penang, you can contact me. :D

Best wishes to all your journey! You are indeed a world traveler! Merry X'mas and a great new year to you~~

wow. I wish i can travel the world too. Merry Christmas FuFu!

Glad you included the Taiwan flag and also glad you're going to visit my home country. FuFu is always welcome in Slovenia. I hope FuFu will have red carped rolled out at the airport :P