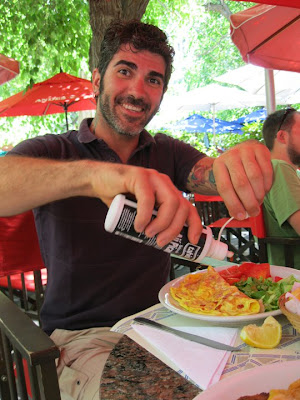 Federico, an Italian, took bus from Buenos Aires to Mendoza with me. Well, he was worried about the bus that didnt come before 8pm (the departure time). He said i was holding the same ticket as him, thus he asked me if i was heading to Mendoza or not. After that we both were waiting for the bus. He didnt book any hostel here in Mendoza, so he followed me to my hostel. After shower, we went out for lunch. See, i have one new acquaintance to have lunch with me! 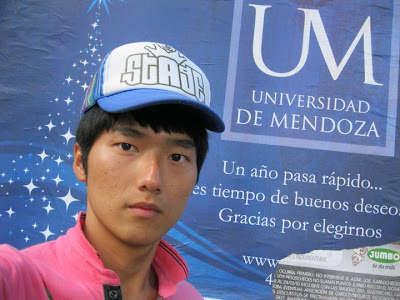 FuFu @ Mendoza!! The weather here is cool!!! Probably the city is just next to Andes (the famous mountain range here in Latin America, just like Alps in Europe and our formidable mountain range in the Peninsular). 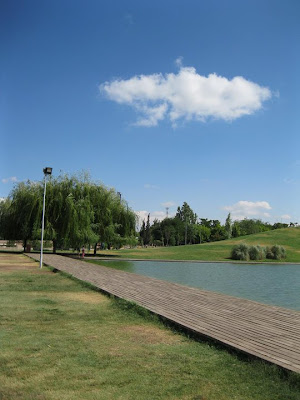 After lunch, we both walked back to the hostel. I took my stuff (water, snacks, little FuFu) and headed out exploring the city. Fist destination is Central Park. The first thing is to check out the park!! LOL 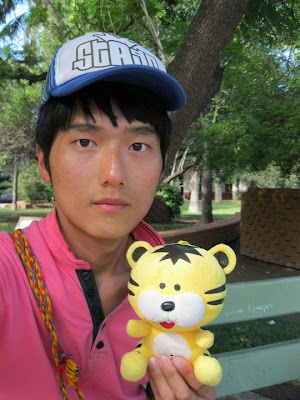 After Central Park, i brought Little FuFu to a square few blocks away from my hostel. Observe the movement of the people, traffic and city!!! 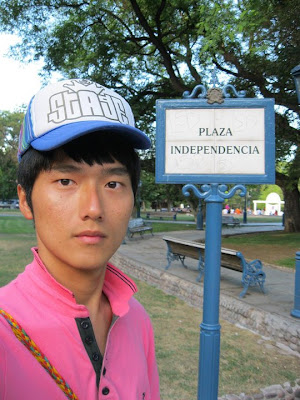 After walking around, well most of the major attractions are parks and squares. My favourite!! 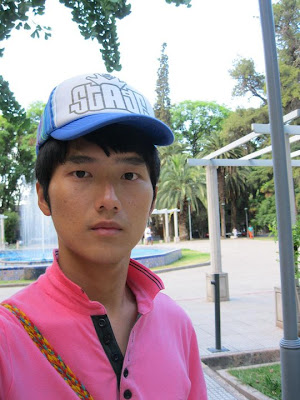 Came to Italian Square. Had a short rest here before heading to another HUGE park. 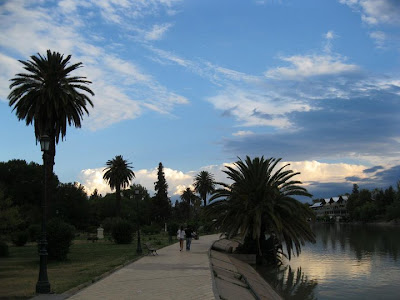 This park is seriously huge!!!!!!!!!!! Basically, just like a forest with many cars snaking through here and there. Because it is huge, so i chose to visit Largo del Parque first (Lake of the Park). Amazingly, the sky was damn extremely magnificent! But no sunset! 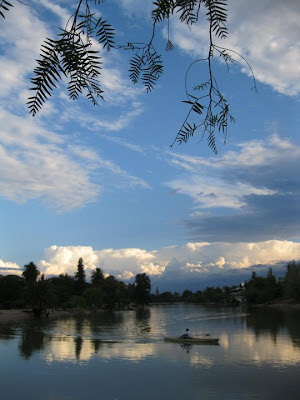 I honestly, love this park!!!!! Spent roughly more than an hour walking around. Phew... i love my life! 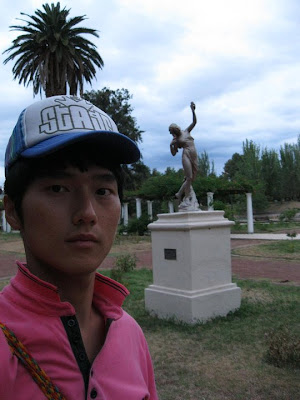 About to leave the park. While heading the direction back to downtown, i saw a nice sculpture. 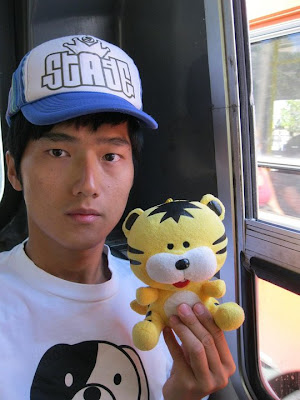 On the bus heading to a winery town (45mins from downtown). Again, with a fixed single fare Argentina Peso 1.40, you can go to anyway in the metropolitan region of Mendoza!! Imagine, the bus fare from Kepong/Sg. Buloh to Salak South or Damansara is only RM 1.40, will the people move around by bus? 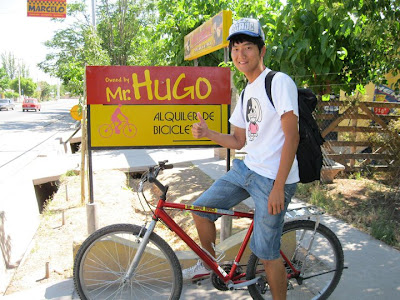 Gonna start my solo bike+wine tour around the town. The rental of the bike is Argentina Peso 30 (roughly RM 18-20 = US$6). I booked it through hostel. If you walk-in yourself, it is only 25 Peso! But well, at least the staff told me where to take bus and gave me Peso 50 cent to take bus (i did not have more coins to take bus). 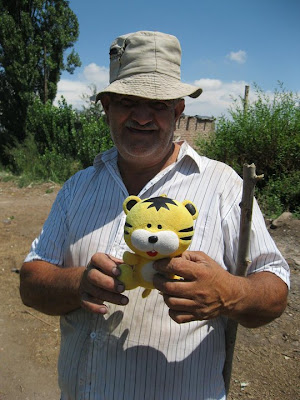 This old Argentina man saw my little FuFu and shouted at me! (Well, little fufu was hanged on the bike XD) I did not understand what he was talking. But he was kind to show me the direction of the Wine Museum (though i had the map with me). 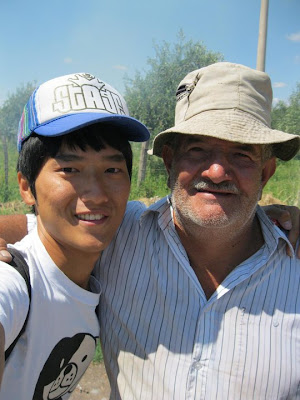 Before heading to the museum, i quickly snapped a picture with him. LOL 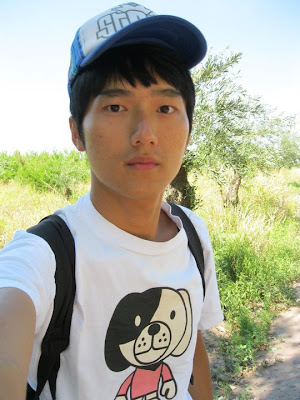 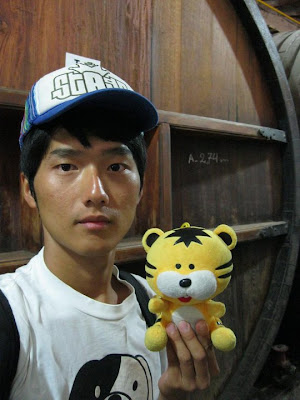 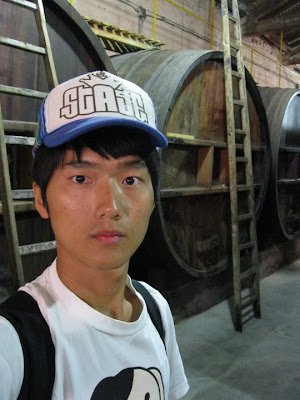 The barrels are HUGE. More than 2m high. 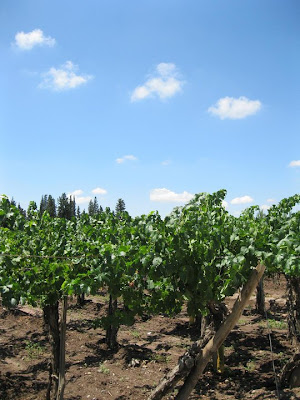 The vineyard of the museum. 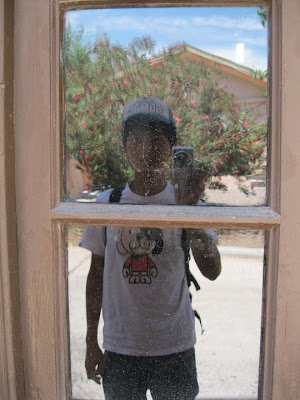 Need to mention that, almost all people passed by were looking at my cute t-shirt! lol 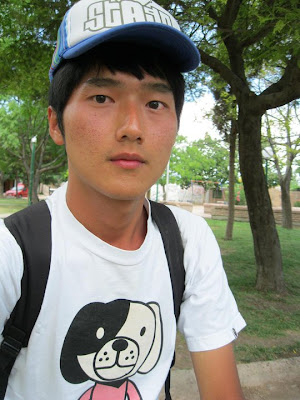 Had my lunch at a park. Gotta fill the stomach before wine-tasting or i would definitely get drunk after a glass or what!! lol 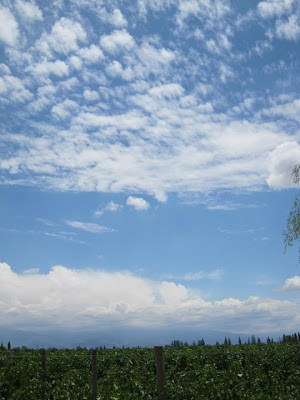 The sky was really awesome! It´s nice to cycle around. 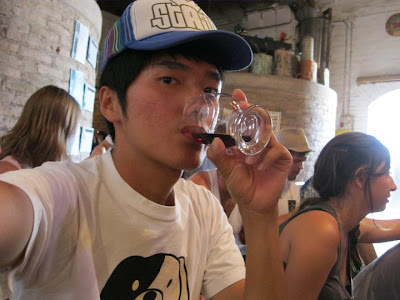 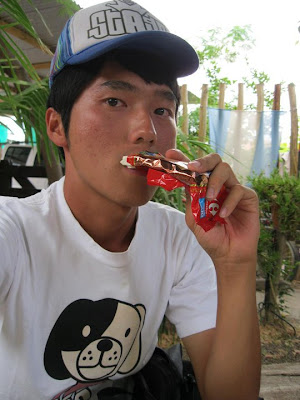 It was a long bike+wine tour. But i totally enjoyed it. Resting at the bike shop. The owner gave me a glass of wine too. I drank it with my cheese+nut. Nice combination!!! Life is good! 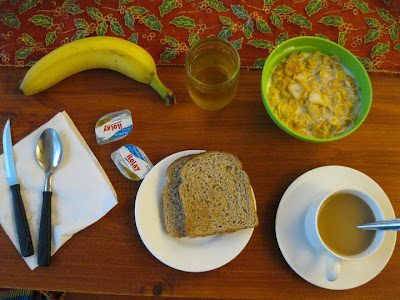 My last breakfast in Argentina! 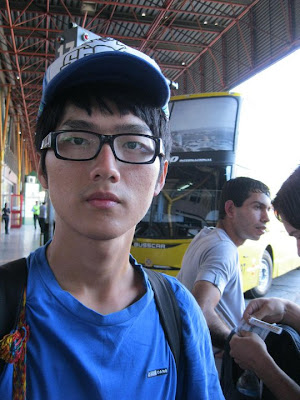 Gonna head to Santiago from mendoza! Bus left at 9:45am. I will be back to Argentina!!

Email ThisBlogThis!Share to TwitterShare to FacebookShare to Pinterest
Labels: Argentina

i can imagine it when you say it's huge as im sure youve seen many parks all throughout your trips in different countries.

so nice of you to accomodate your new italian friend.

Oh yeah the park is beautiful.
And life is good for you! Haha

how many places have you been so far i wondered ??

Everywhere u go also bring along your little fufu?? hahha~ So cute!!

How are you my friend?
I believe it's an amazing experience to travel in south America!
Happy Chinese New Year!

Ohhh I love Argentina!!
Last year I've been there because of my job, I stayed with a friend in some buenos aires apartments, we had so much fun
argentinian people were really nice, don't you think so?