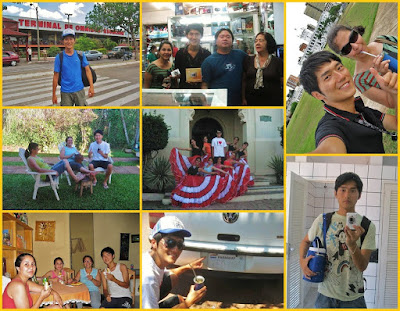 I saw Hedy (we studied Japanese together in Osaka, Japan, April 2002 - March 2003) waiting for me at the arrival hall. It was 38"C when i arrived Asuncion Bus Terminal. The journey back to her house was about an hour if i remember correctly. San Lorenzo is a nice neighbourhood. After a cool shower, i was invited to have terere (Paraguayian tea) with her mother and auntie, we were sitting at the garden. Empanadas (something like our curry puff) was my favourite. I told them we have similar stuff like empanadas in Malaysia. I tried to shape our curry puff with Paraguayian filling, baked (not fried) it. Later they made me a typical drink that usually drank during Christmas, Clerico = fruit + wine was yummy!

How about the city itself? Well, Paraguay is still relatively poor if compared with other South American countries. However, the friendliness of the people simply amazed me. I surprisingly saw many Asians (mainly Chinese from Mainland China and Taiwan) doing business there. I bought a digital camera (Canon A3100, US$110) from a Taiwanese lady. She and her son were happy to talk in Mandarin with me, well once a while Hokkien after i told them i can speak Hokkien too. Anyway, i had only visited the capital city, Asuncion and Ciudad del Este. The next time i fly back to South America, i would definitely make sure i have enough money to explore the entire country as what i had promised Hedy and her family when they sent me off to Buenos Aires, Argentina!

Wow! You studied Japanese for a year in Japan! I want that too! ;)) Was it difficult to find a course there? Was it super expensive too? I'm actually genuinely interested :D

BTW, nice photos! And, lucky you got a chance to travel so far! :D

jeles that you get to travel all the time!