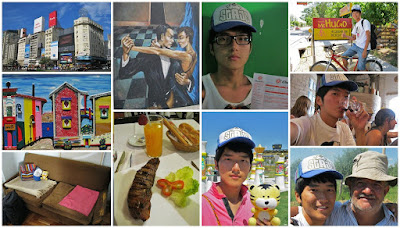 Argentina (Summer End of Dec 2010 - End of March 2011)
Tango? Argentine meat? Wine? I had actually visited Argentina when i was studying in Curitiba, Brazil (Aug 2010 - Dec 2010). But the capital city, Buenos Aires is totally out of my expectation. I was wondering if the long-hauled bus journey from Asuncion had transported me back to Europe. Very French and Spain i would say. Argentina was supposed to be my last two stop before heading back to Brazil, because i couldn't get the visa to enter Bolivia, so i completely changed my itinerary.
Couchsurfing is not something new to me but, i sent the request last minute and lucky enough i got a couch in Buenos Aires. My host is a nice guy, but i felt uneasy and frustrating when he asked, "Can i believe you? Because i am going to give you the key of my apartment." after two nights sleeping on the couch in the living room. I had a boring Christmas as well. He promised to bring me to a pub but ended up walking around the neighbour alone. I don't blame him as it's his first couchsurfing experience. And he knew very little about the city he is living in. How pathetic. I decided to stay at a hostel in the downtown, since his place is nearly 45mins walking from the city centre.
I somehow felt happier to pay for my own lodging. (Anyway, he told me later it would be no problem to stay at his place again next time.) I talked to some travellers in the 8-bed dormitory room. They recommended me to visit here and there before heading to Santiago, Chile. I had a great time in Mendoza, a small town that famous of its wine. I met Coti in Lima, Peru (a month later), for sure, i will crash at his place when i go to Argentina again then down to the south for glacier and penguins! lol
阿根廷
這不是我第一次去阿根廷
在巴西交流的時候已去了
從巴拉圭坐了二十個小時
在巴士上度過難忘的一夜
第二天中午到達了阿根廷
首都非常像法國和意大利
可能是歐洲移民多的關係
其實阿根廷是最後第二站
因爲拿不到伯利亞的簽證
臨時更改計劃南下阿根廷
也趕緊聯絡某個沙發主人
在他的沙發睡了兩個晚上
發現是他第一次招受客人
避免爲了有什麽事情衝突
我決定投靠青年客棧算了
自由自在還認識了些朋友
樂意跟我分享他們的經歷
就這樣我去了個酒莊小鎮
在那邊騎單車及品嘗紅酒
這旅程認識幾個阿根廷人
日後回去有免費住宿提供
下一次我要去冰河看企鵝
Posted by fufu at Friday, January 06, 2012

Gotta salute you for all the experiences travelling especially "Couchsurfing" which is new to me.

Call me A.S for AkiraSabine said...

Nice, I'm currently curious about South America! I'm going to dig and follow your post about it closely and decide which 3 countries to quench my curiosity on that continent. ;))

Just wondering, did it disturb you in anyways with limited Spanish speaking skills or you've got yourself equipped with essential phrases beforehand? I know it shouldn't be a problem at tourist attractions but I like to stray a bit, so... ;P Last but not least, is HelpX or WWOOFing possible with a visitor visa in this continent?

Thank you for your input, Bro Fufu! hahah!

Banana : haha yeah couchsurfing is a new option for traveller :)

Akira Sabine : huuh? i would suggest not only hit 3countries but as many as you can!!! hahaa more than 7 is good!! what is HelpX or WWOOFing?? erm most of the main tourist spots, hotels, hostels, and some random young local speak english, i dont speak spanish :) lucky i am still survive lol

Call me A.S for AkiraSabine said...

At least 7 countries?!! Neh, you can keep that record without worrying on others breaking it. hehehe. I'm not as rich, that's why. ;P Also, I'm too lazy to move around too much and to deal with the border procedures, different currencies, different telecommunication networks, etc. You know what, even few days back,
I've made up my mind to trim it down to just 2 countries for the 3 months spent in that continent. For me, I'd like to just choose a place and stay for like a week, before moving on.

Furthermore, because I'm not as rich, hehehe, I'm thinking to do work exchange to get to know the locals better and living their way of live. I'm currently doing HelpX and WWOOFing here in NZ and I'm thinking to do the same as well in South America. It's fun, fulfilling, opens up to new knowledge/experiences as I sustain my funds. Loving it so far!

Couchsurfing is just as great too as we get to talk and share with fellow like minded travellers. You would agree that this is where we get to interact with many different travellers with many amazing stories. Just yesterday, I knew this guy who has been living in a campervan for decades now and he's written a guidebook about travelling NZ in a campervan. Amazing, isn't it? A mobile home here in South Island is just a bliss as he could sleep and cook his food while enjoying the stunning views here in NZ.