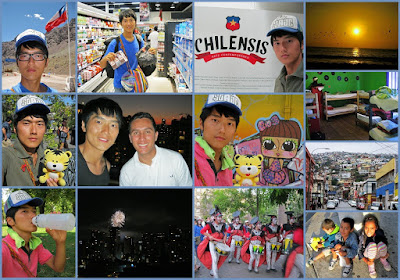 It was a scenic bus ride from Mendoza, Argentina to Santiago, Chile, from the vineyard to olive plantation, from sea level to more than 2500m Andes snowy mountain ranges. So after eight hours sitting in the bus, finally i got myself arrived safely in Santiago. Withdrawed some money, called my host, jumped in a train to Univesidad Catolica Metro station. Met up Louis, we stopped at a supermarket for some stuff, he prepared dinner. It was the new year eve. We were watching tv while catching up with each other. I wanted to go out for the countdown but he didn't like the 'festive' crowds. He kept convincing me that the rooftop of his apartment could see fireworks.

"Chi Chi Chi, Le Le Le, Viva Chile. Feliz Año Nuevo", as everyone was proudly shouting out loud joyfully right after the first firework was fired. I repeated it again. The rest burst out loud. Probably because of my Asian accent. Later, several families started to fire the firecrakers they brought along. It was fun though. Something i didn't expect it could be like that special. And this was how my i began my 2011 in Chile. Louis couldn only host me for a night, so on the first day of 2011, we were walking around the downtown for hostel. Thanks God, i had found a nice hostel with awesome ambience and it served good breakfast. Santiago is a nice city. It has many great park. Totally enjoyed walking around the city, though the expenses was slightly high compared to Argentina and Paraguay and it was scorching hot (i drank 4L of water daily average).

My luck was not always with me. Why? Because my wallet was pick-pocketed. I lost two credit cards. Fortunately, i had Japanese Yen with me. Immediately, i exchanged all Yen to American Dollar after chatting with group of traveller from Peru. It's much easier to have dollar than Yen while travelling in Peru, because the exchange rate is way lower there. A week later, i headed to Puno, Peru from Santiago, Chile. Again, the bus ride was a scenic one. I met some Chilean girls during this South American trip, guess i have to visit them the next time i fly back to South America. Chicas, abrazo y besos!

p.s. : A full travelogue about Chile will be written later.

fufu, how many ctry hv you covered so far?

Wah, how many Chilean girls you met? lol!

walking here with a smile. take care.. have a nice day ~ =D

Mr Lonely : thanks do come often ya