Urban guys arent so clueless about skincare any more. Cleansing, toning and moisturising, that is the basic skincare regimen that many guys already have in their vocabulary. Now, they have gone beyond that to include products such as eye gels, face scrubs, anti-aging cream and even facial treatment - stuff once considered 'sissy'.

"Facial treatment is unisex, said David, my site diving supervisor, not the matter of sex, it is the matter of dirt that you need to get rid of." I really take his advice and am starting to think of my YOUNG time. With a fair and clear complexion, a young boy who have been snatching thousands of girls` hearts... 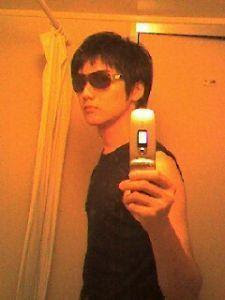 Since the day i had decided to travel around the world, i had given up to take extra care of my face. Because i know that it is hard to control the cleanliness of the hostels or backpackers and the different climate of the countries i was heading to from another countries. Additionally, i need to work on the night shift and long hours working have worsened my facial problems.

I had my hair cut yesterday. After coming out from the saloon, i was stopped by a beauty specialist and offered to have a special facial treatment just for $30 because it was the company`s 26th anniversary promotion. So i decided to fork over the money to give it a try. It actually was my ever first facial treatment. I was amazed though. It felt too good. I personally like the ice mask, the cooling effect really strengthens the collagen of the skin. 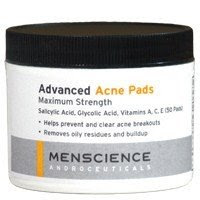 MenScience - Advanced Acne Pads.
After the treatment, i see a clear complexion of my face - impurities and oily residues all gone. Within an hour plus, i noticed a big difference. I was then convinced to buy some of the products - facial wash, toner, moisturiser and acne cream. And decided to have a facial treatment once a month. They are quite expensive but i wish it would work and be well worth the cost in this instance.

If you want to be a man, be a beautiful man.

ah...tricked into buying skincare products...hahahaha. wont blame you. my wife does the same to her customers....lol. anyways, you are right. it is now a norm for us men to use skincare products nowadays. to prevent our face from aging too fast lor....i myself use quite a number of products. initially i bought l'oreal but ended up using biotherm instead. but the price tag........burst my wallet everytime i refill. face handsome oso no use, pocket no money...hahahaha

hi there, i m so agree with u.. i feel guy should take care of their skin as well not only girl.. everyone wan their gf looks good, clean, pretty, nice, for girl, who wan a bf who smelly and yucky right or not..hhaha anyway nice to meet u :p linked you!

a young boy who have been killing thousands of girls` hearts...

haha!~ You are so frankly when telling us this! But I can't deny that you are really handsome from heart to your outlook ;)

Ha Ha, no wonder these companies are making lots of money. LOL

hmm, I actually wondered how much they've paid you to have this advertorial style write-up in your blog (kidding =]), writing advertorial news is what i am currently doing.

Well, personally I do agree with you, if you want to be a man,be a beautiful man.

I am very concerned about my face cleanliness seriously, and Who on earth did not wish they would have a incredible porcelain and flawless skin like an egg shell?

I dare not eyes to eyes with others when I had my face full of acnes and breakouts because it is just... embarrassing. haha.

I am going to buy my 1st cleanser from dermalogica when my salary is ready.

anyway, thanks for dropped by the comment in my blog ya, really appreciated that.=]

By the way, we have the same surname:P:P
Can i know ur surname in Chinese character?

Metrosexual is the trend now. It i super important to take care of ur skin as well(^^)

Hey, u coming this week? sure! we can meet up! add me up in my msn: knightrazor@hotmail.com

LOL... guys are so metrosexual these days.

You are right that a guy should take care of himself... so how pretty will you be?


calvin soo : wow your wife is selling these stuff? got any discount for me or not? anyway dont spend too much on the facial stuff also, do more exercise help too =)


迷迭香 : of course i will use them or else i wont purchase =) make it as a habit? yeah i wash face everyday and will put on lotion before i go to bed


sabien : yeah all of us should take care of your face as important as our health ya =)

feeling : hahaha, i am a honest boy
i dont tell lies =)


pete : those companies are spending lots money on R&D also


yeng : hihihi, laughing is good actually, we should laugh out loud sometime :p

小丑 : yeah i got nothing from the company but the main purpose i wrote this is just for my own sake! and also the title =) wish they really pay me for this, anyway hope you could buy your first dermalogica with your first salary soon...


Xjion89 : i thought metrosexual is very common since 10yrs ago, ok i know, you mean in Malaysia~~


waiseng : it`s actually up to you, i didnt even care of this but until i realised i should do something... yeah i am now back to malaysia, see if we could meet up or not

cleffairy : actually metrosexual is very common in japan already (i guess 10yrs ago) we are still far away from the developed countries =)

ahahaa.. some guys here still teasing about male's cosmetics
i think it's weird, there's nothing wrong for taking care of ourself
ah Can gave me a small shiseido lotion a few days ago.. hahaa
yeah you should do some treatment
i still remembered the last time we met, you got a big pimple on the nose
;-P

Nus : hahahahha sorry for giving you the bad impression of me!!! anyway i will do more treatment so that our bali trip will be excellent~~ though i know regardless the look, our trip will be awesome also =)