First Lodging and Night in Curitiba 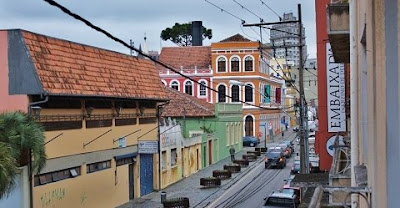 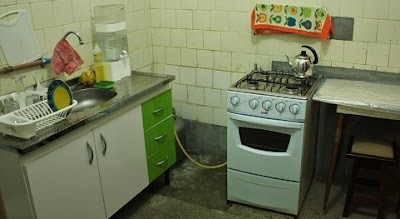 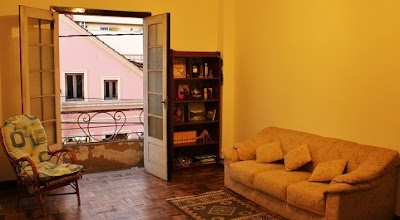 You guys must have been curious and wondering why i would know my host, Oldy. Well, it's a long story actually but i will keep it short here. Before i flew to Curitiba, Erla, my coursemate told me about Couchsurfing.com, an international social-networking platform for a free couch (literally free lodging). And i sent numerous of request to the hosts living in Curitiba. Luckily i got several positive feedback. After a quick selection according to the descriptions of the condition of the houses, and comments left to the hosts, i selected Oldy who is currently living in the heart of the city centre.

Oldy, 37 years old, a parttime lecturer of Physiology, is one kind, friendly and easy going person! I actually, was awed by his adventures at first. Also enjoyed reading his adventures with his bike, his friends and brother, Fabio. He loves travelling, just like FuFu but with his own unique way. Being an active cyclist and with his passion, he successfully did all his travels by his mountain bike, from Central America to Latin America.

After couples of private messages via Couchsurfing.com, i finally decided to stay with him. And he allowed me to stay at his apartment until i had found a nice room here in Curitiba. As time passed, finally i landed Curitiba safely. I called him and informed him when roughly i would hop on the airport shuttle bus heading to city centre once i had purchased a public phone card, BRA$8 (RM14.70 = US$4.70) as what he told me to do in the message. I got off in front of Biblioteca Pública (Public Library). There, i saw Oldy walking to my direction with a smile on his face.

Probably i was carrying my 20kg luggage, the several minutes of journey to the apartment from the point where we hugged was a nightmare, though Oldy carried my backpack bag. What a great relief i sighed once i had arrived the apartment. Only from that moment, i felt like i was in Latin America, finally! It was nearly 1pm, so we decided to have a buffet-styled lunch at Lotus Restaurante (a Chinese restaurant).

I found out later that buffet lunch is quite popular among the local here in Curitiba as there's plenty of this kind (be it Italian, Chinese, Mexican or Brazilian) of restaurants around the city. I expected to have Brazilian food but my host like Chinese food and we were very hungry so ended up eating a lot of dumplings.

Oldy was showing me around the city centre after we had paid BRA$7.50 (RM13.80 = US$4.40) each. Well actually, it was his treat. It was supposed to rain according to the forecast i had check the day before. Fortunately, it only started raining after Fabio, Oldy's brother had come back at around 8pm. Then, Oldy called his girlfriend and others over for a simple welcoming with me. After some chatting accompanied with glass of wine and beer each, i headed to the reading room and called it a long journey to Brazil from Germany.

p.s. : I kept my camera aside with other belongings, so the pictures below are all taken the day after. Due to the privacy reason, i won't upload the pictures of the rooms here. Both my host and his brother are camera shy, and i only stayed with them for a week, i would definitely take few pictures with them before i leave Brazil! 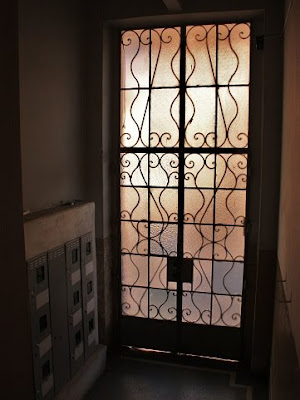 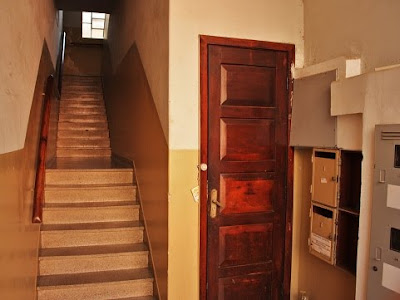 After this staircase, everything would be fine! 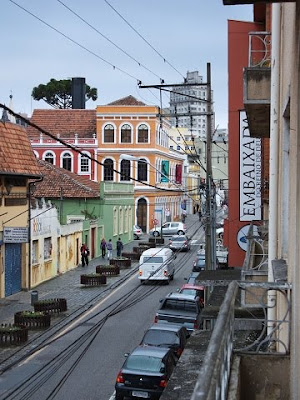 Lovely neighbourhood FuFu was staying, taken from the balcony. 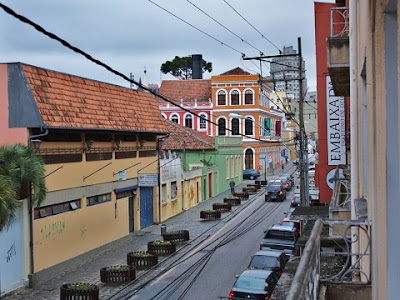 Simply like the colourful buildings and well-tender pots of flowers. 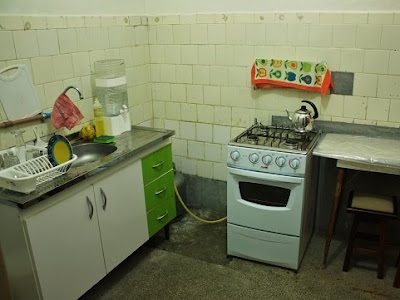 Small but a neat kitchen. 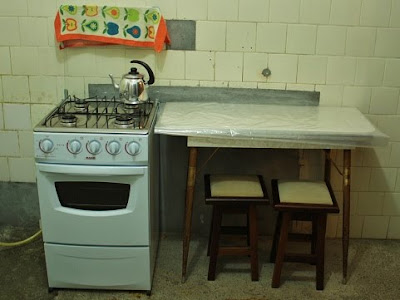 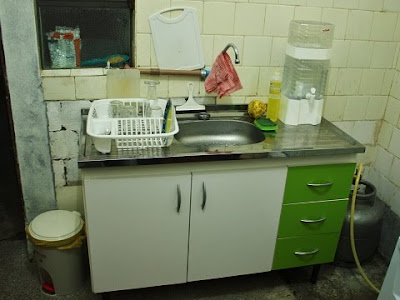 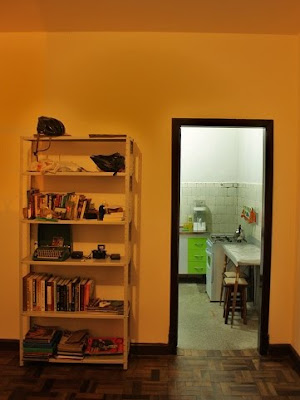 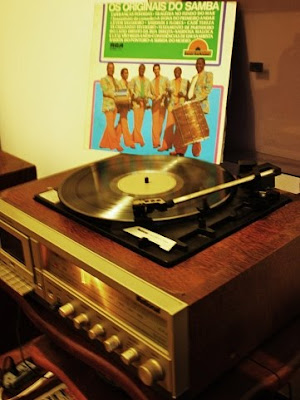 Oh mg god! This caught FuFu's attention once he entered the house. 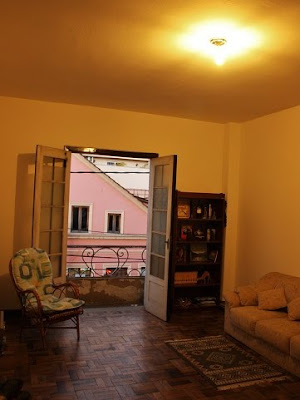 What a comfy living room ever. 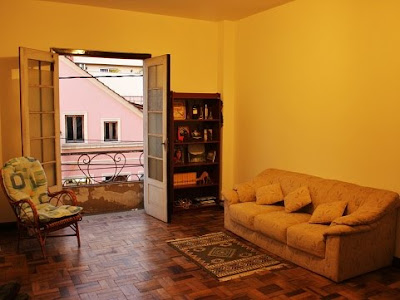 First FuFu thought he would be sleeping on that couch. 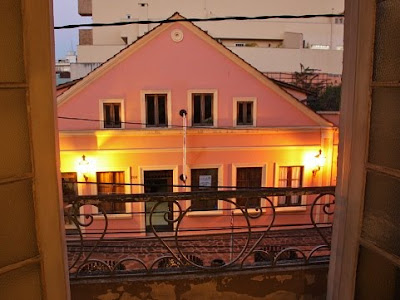 This pink building is a souvenir shop. Very expensive. 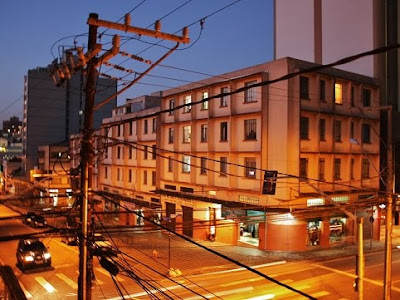 Seen from the left side of the balcony. 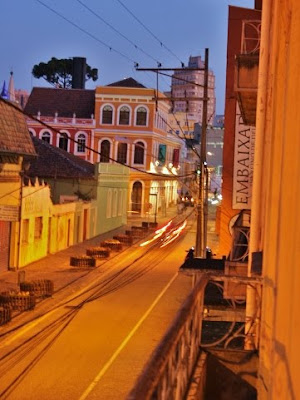 The right side. With no car parking. Very quiet after 8pm.

And now you are in Brazil, but I have to shut down my PC and leave home now.

I have to work.

rainfield61 : i am here since 3mths ago ya :) go to work first, come back again later!

looks like a very cosy place, and yeah, i like that gramophone also.. did you play some music with that??

erm... so where do they park their cars ?

迷迭香 : normally those who have cars wont live there... lol :)

Very comfy place, where is the bedroom?

Are you there for visit or assignment?

Sincerely hope you are feeling better by now. Take good care of yourself. Your first lodging was a simple but cozy place and that was a good start!

I have phobia to use gramophones as I used to break so many needles trying to play my dad's old set when I was a kid.

You are really FuFuChiao Nomad, living in so many places!! So fun and enriching! I think Curitiba streets are colourful everywhere! Have you tried cooking Brazillian dishes? Come back and cook for me!

welcome to couchsurfing.com! i'm a couchsurfer too! met a lot of good CSers before!

Haha! Oldy and his brother is like me, camera shy! LOL!!

Nice place! But so quiet after 8pm? So everyone sleeps early there?

that gramophone is very classy!
but night is silent at all after 8pm, feel so bored.....

uLi.佑莉 : hihihi thanks :) more about brazil will be shared here sooner =p


micki : yeah what a good start...really gotta thanks my host! gonna give him a big hug again before i leave curitiba =p


Twilight : well brazilian food is not easy to make... but well basically meat meat meat and meat :) gramophone phobia? you were too naughty...but well i love it...plan to get one in malaysia


foongpc : hahahaha i dont care i will take pictures with them sooner or later :)


发白日梦^^ : because everyone will be at the pub/bar/club :) lol noone would like to hang out on the street =p

my kind of place. not so cozy yet nice enough for a short time stay.

the first photo of this post actually looks like a painting. thats how nice the place is.

im so happy seeing those photos of you in the philippines. driving a tricycle! on your return ill let you drive something youll never forget. we can race with it.

dong ho : yeah good!!!! amazing race in the philippines? cant wait! hihihi the neighbourhood is nice :) will upload more photos of the area sooner here :) yeah a nice lodging i must say!!! wanna go back visit them sooner...

I think is a great experience to live in Brazil! Know some new friends and taste all different food!
Your place is simple but nice, at least bigger than houses in Hong Kong and Macau!
Take care! 保重身體!

Rafael Lam : hehe the apartment i am living right now is smaller than those i have seen in HK and Macau... :) well i will take good care of myself no worry!

i heard of couchsurfing, always wander it is trustworthy or not. i guess you proved it :D

Lily Riani : yeah i am feeling much better now :) thanks =p and well yeah couchsurfing is safe! just you need to find the right person that you would be comfortable with ya...but again it's always safer for man :)

Get sick oversea will make U homesick de....take gd rest and start yr journey again..XD
U really get gd luck to have a nice host from couchsurfing.com...nice stay right?i will try to search my CS soon..wish me gd luck too...
有时候你不认识的朋友，了解认识后就成为朋友或好朋友了, 你放心的幸运星会左右陪伴你的lol...好好照顾自己:)

Winnt : haha exactly, that's why i hate to get sick whenever i am away from home... anyway much better now already :) yes! couchsurfing is nice... just you gotta select the best from the option you have :) good luck

Woooo guest what? I've been looking up and down for couchsurfing.com. I've been to the website but lost the address afterward. Been trying to remember back the name... and here you remind me the name back. Thank you. :)

The apartment is really simple and nice. So where you sleep?

Che-Cheh : hihihi yeah couchsurfing is great! you gotta make full use of this platform!!! :) i was sleeping in the reading room :) lol how nice of them not letting me sleep on the couch in the living room...lol

there is character in the buildings

Vinyl records? That's so classic!
Actually, you still can find them on sale in London's second hand shop. There are tons of them.

London Caller : yeah very classics right?? hohoho i also wanna get one for my new house :) well i mean in the future :) wish i can get a cheap one in malaysia

couchsurfing.com??? are you serious? I signed up for that like 2 months ago????but I haven't opened it since then. I hope I still remember my pw.hahaha. anyways---you are lucky to have found a kind host.we'll people in latin america are warm ...just like Filipinos. hehehe

pusang kalye : well i got a place to stay here in Curitiba a week after i had got an account there...you shall try :) hihihi sure you can meet a lot of nice poeple ya... haha yah most of the people here are very friendly... erm also i met many bad guys there in manila >< but you are not definitely =p

from your pic, it reminds me of those mexican lifestyle where we can watch from those american movie^^ very classy n not really modern..

Lisa717 : why mexican? should be latin america though :) lol but anyway i will go to mexico next year...will show you more pictures from mexico then :)

ahhhhhhhhh, i love that old player. And i must agree with you that the kitchen is small yet very clean!two thumbs up for that.

Now, Brazil, is cute, i think i will associate that with Mexico and Philippines, they have some sort of similarity in design, language and living.

stevevhan : yeah i like the lifestyle of filipino too :) erm brazil is nice! erm havent been to mexico but will let you know once i have visited the country next year ok? i love the apartment!! hohoho really thanks oldy!

a great adventure Fufu.. u r one in a million i believe

Your lodging looks so retro :) But I'm fine with that. You get to experience the real Curitiba life, you're not put in a highly secured condo.

That looks like a pretty cool lodging that you have there. The neighborhood looks pretty neat too.