Being successfully obtained the visa and a cheap ticket from Tokyo(Narita International Airport) to New York(Newark International Airport), i was so looking forwards to my trip to the United States. So i had came to the city that never sleeps. New York City, US`s most populous city and among the largest metropolitan areas in the world. NYC is also rated as an alpha world city for its global influences in media, politics, education, entertainment, arts and fashion. 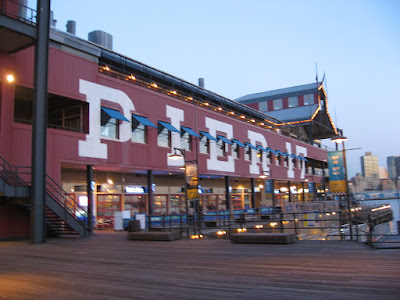 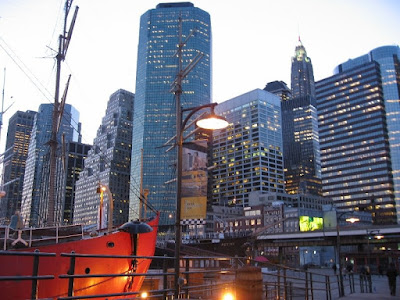 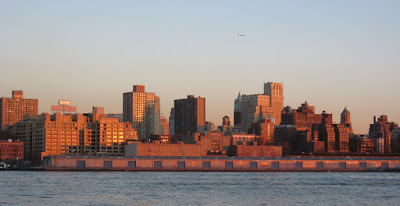 The skyline of Brooklyn Borough from Pier 17.

Like Petronas Twin Towers in Kuala Lumpur, Eiffel Tower in Paris, Times Square has achieved the status of an iconic world landmark and has become a symbol of its city. I was crazily fascinated by the huge number of animated neon and LED signs or advertisements that have long made it one of its iconic images. 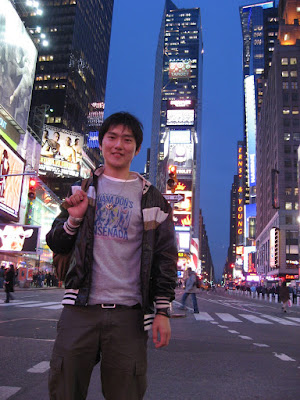 Me at the junction of Broadway and Seven Avenue.

There i met up Ziggy and her sister, Sze Wan who i watched a broadway show, Les Miserables together with after dinner at an Italian restaurant. I had a great night at Times Square. Need to mention, before i forget, there was a black guy requesting to take a picture with me. `Perhaps he thought that you are one of the Korean or Japanese stars.`, Sze Wan said. LMAO 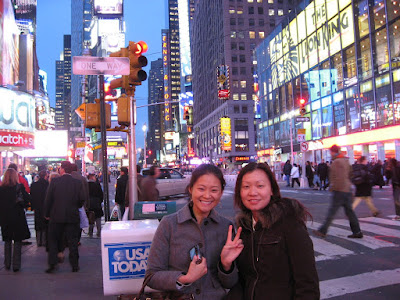 Sze Wan and Ziggy in front of Planet Hollywood. 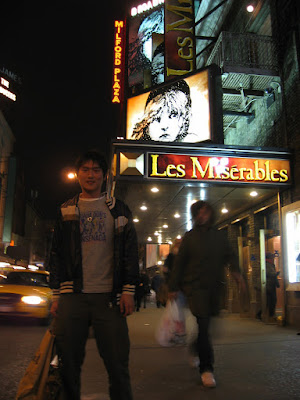 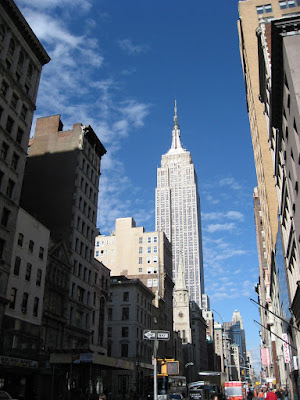 Empire State Building, one of the world first skyscrapers and the tallest building in NYC after the destruction of World Trade Center in 2001. The bird`s eyes view at the observation deck was very impressive. The word appeared on my mind is only buildings, buildings and still buildings. Phew, what a concrete jungle.

Later Ziggy showed me around the Midtown and Uptown. Thanks God. She was a nice guide! She brought me to the popular tourist spots such as Central Park, Washington Square Park, Lincoln Center, New York State Theater, Rockefeller Center, etc and explained every little thing to me. I found the right person to meet up. She too bring me to a nice club and i had a fun time there with her friends. 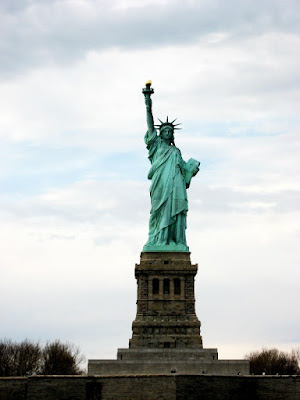 The Statue of Liberty.

Next destinations on the next day were Ellis Island, the first stop for most immigrants from Europe, and Statue of Liberty, presented by France in 1886. Departed from Liberty State Park, we were enjoying the view of Downtown Manhattan and the cool wind at the deck on the ferry.

The Skyline of Downtown Manhattan.

After that, we headed to Atlantic City where famous for its broadwalk, casino gambling and as the inspiration for the board game Monopoly and most importantly also Ziggy`s hometown. Spent couple of nights there with her family before i went to Washington, DC.

Email ThisBlogThis!Share to TwitterShare to FacebookShare to Pinterest
Labels: U.S.A

I hope to visit NY too one day...photo of the statue of liberty is superb!

U in Malaysia ? Manage to find a job ? I just learned how to create my blog here. Look like mine one is not as colorful & fastastic as your. Do visit me ya & keep in touch.

wow!!!all of pics that u took so cool ^^ i love to see it lol
wish to see the pic that i took wif u here:P

WHoa! Canon really rocks! New York is an awesome sight, good for you

shashinki : trust me, you would surely love NYC :D

khoo : yo 你的文筆很好 i am adding you!!! try to add some pictures or change the font`s colour so your site would look more colourful then

maii : i miss NYC too!! tell me when are you going back? we shall arrange and meet up there ya! =p

air : hahaha, pass it to me when i go to spore later ok?? or you can post it to me by mail, i dont mind lol

poo : i promise i will try to put our pictures here as soon as possible! we had a great time in thailand right, didnt we? ^@^

shurikenstuff : well, NYC is a must go city mate, hahaha...i am thinking of buying Nikon though canon rocks @_<

mai : uhhh next year huuh... ok i will try to see you at times square XD i wanna meet you and your GIRLS lol

realy i like all ur pictures which u took everywhere.
wish u good luck
take care
Meryem