After New York City and Atlantic City, my third destination was Washington, DC the capital city of the United States. If New York City is `Buildings, buildings and buildings`, my first impression of the city would be `pillars, pillars and pillars` or more professionally known in structural engineering is `columns, columns and columns`. The term column in architecture refers specifically to such a structural element that also has certain proportional and decorative features. A column might not support any major structure but be a decorative or triumphant feature with example a statue on top.... Well okay this is my travel log, i shall back to the topic. =)

It`s no secret that Washington, DC is one of the most popular tourist destinations in the states, a great choice for everyone. In the nation`s capital, you will find endless assortment of fun, educational attractions that appeal to travellers of all ages, and many of them are free of charge. Museums are interactive and engaging, and the lengthy list of noteworthy monuments memorial and government is unmatched. There has a lot to see and do, and putting together the perfect Washington, DC itinerary can be a daunting task, but that is where the world traveller comes in. If you have just two or three day on your visit, dont try to see everything. Make a must-see list and save the rest for your next visit. 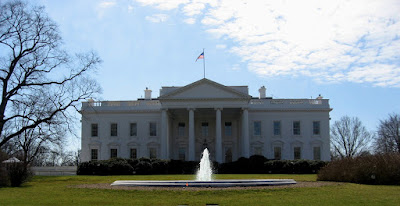 My first destination was White House. I guess everyone knows what is it and who is living in White House. If you have nowhere to stay, you may consider camping in front of White House and please dont join the protestants if you wish to go back safely. 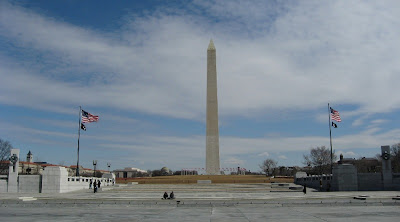 I then saw a tall white obelisk monument afar off. I guessed it must be Washington Monument and headed towards it without wasting any second. It was reopened to public for visitation since April 2005. Free Washington Monument tickets are available beginning from 8.30am at the street kiosk in front of the monument. There i saw line of visitors queuing up to go up to the observation floor for the city bird`s eyes view. 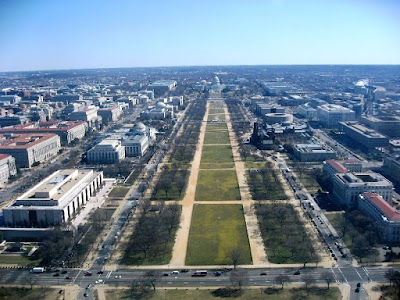 View of National Mall and the US Capitol from top of the monument. 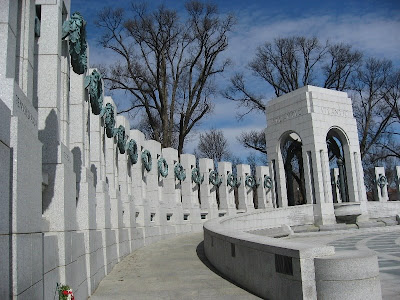 Located between the Washington Monument and Lincoln Memorial, this memorial honours those who served during World War II and supported the war effort from home. This memorial features two arches, both Atlantic and Pacific and a reflecting pool in the middle. 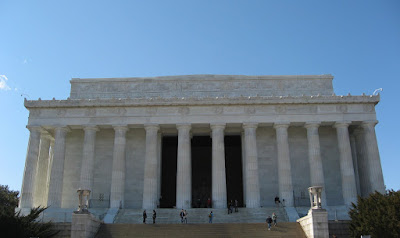 The Lincoln Memorial is a United States Presidential memorial built to honour President Abraham Lincoln. This grand memorial overlooks the Washington Monument and the US Capitol. The building is in the form of a Greek temple and contains a large seated sculpture of Abraham Lincoln inside.

The 19-foot marble seated sculpture. The interior of the memorial.

I crossed the bridge on Potomac River built behind Lincoln Memorial (Washington, DC) and after a while i came to Arlington National Cemetery in Virginia. It is a military cemetery in the states and established on the grounds of Arlington House during the American Civil War. The States funeral, Memorial Day and Veterans Day ceremonies are hosted in the Arlington Memorial Amphitheater. The Marine Corps War Memorial is a military memorial statue located near the cemetery. Its design was based on the photo from the Battle of Iwo Jima. 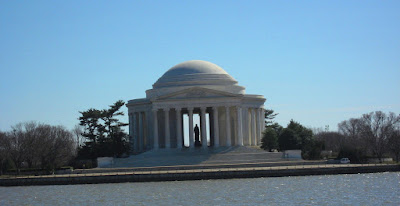 The Thomas Jefferson Memorial is another presidential memorial that dedicated to the American Founding Father, Thomas Jefferson. Beneath the marble rotunda, the statue of the third US president is surrounded by the Declaration of Independence preamble and other famous Jefferson writings.

Jefferson statue. The front steps of the Jefferson Memorial.

I missed the public guided tour and viewing the chambers of the House of Representatives and the Senate. So, remember that timed entry passes to the Capitol are offered on a first come, first served basis, beginning at 9am. Passes are distributed at the kiosk at the corner of the street in front of the East face of the Capitol. 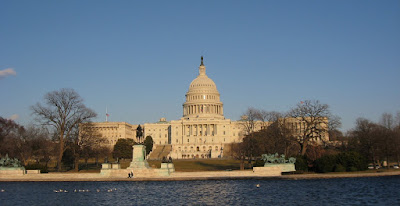 The west face of the Capitol.

Chinatown is marked most noticeably by the friendship arch that was built cooperatively by the local government and its sister city, Beijing. There you can find traditional Chinese restaurants mainstay and impressively mix with the contemporary shops like Benetton and Aveda.

Come and see the 45.5 carats Hope Diamond, dinosaurs, the mammals hall and the world`s largest African bush elephant underneath the rotunda inside the National Museum of Natural Science.

Hope Diamond. The Hall of dinosaurs.

The National Museum of American History will never fail to give visitors a chance to study the fascinating American history. I however dint spent much time in this museum, probably i am not interested in American history or generally history.

The National Air and Space Museum is not only one of the most popular museums on National Mall, but my favourite museum also. It has many of history`s icon of flight and still maintains the largest collection of aircraft and spacecraft in the world. Almost all space and aircraft on display are originals or backup crafts to the originals. I was like a little kid running here and there, fascinated by both aircraft and spacecraft. The museum took my three hours away but frankly i enjoyed very much.

A variety of aircraft and spacecraft displayed at the museum.

National Gallery of Art Sculpture Garden was not bad as it provides an outdoor setting for exhibiting number of pieces of contemporary sculpture collection as well other than a collection of galleries that tell different stories.

The Hirshhorn Museum and Sculpture Garden is in a striking cylindrical museum that focuses on contemporary and modern art adjoining an outdoor garden with impressive sculptures.

Nymph (figure for `The Three Nymphs`). The Burghers of Calais.

Washington, DC has evolved into fascinating, lively world capital that known for its vast green centres, urban spaces, wide roads, sweeping memorials ad majestic neoclassical architecture. I loved Washington, DC so much thus i decided to take the night view of my favourite landmarks of the city on my last night. 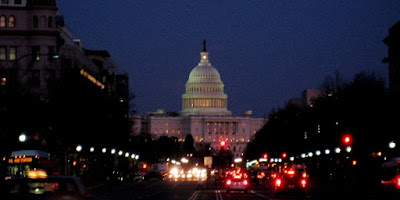 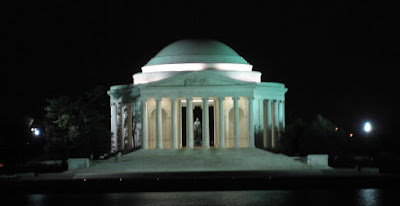 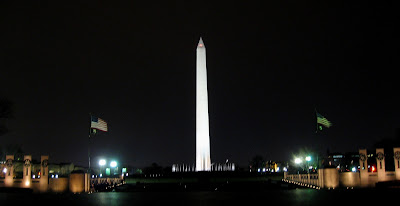 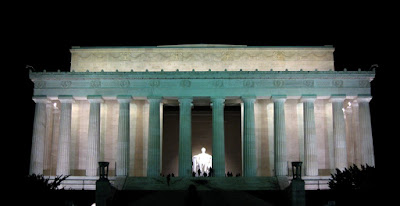 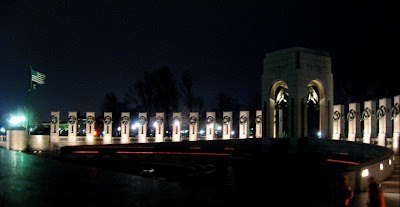 It snowed the next morning, the day i left the city. It was freaking cold, luckily the past two days i travelled around the city were warm. I took Metro to Washington National Airport, ATA to Chicago then Southwest to Los Angeles. I was so looking forwards to go to the West! Wild wild west. =p Stories about Los Angeles and San Francisco are coming soon.

Email ThisBlogThis!Share to TwitterShare to FacebookShare to Pinterest
Labels: U.S.A

Wow Lam...
So you're now in United States..
I'd like to visit New York someday.
Well, have a nice trip ^_^
(Btw, if in the future you're planning to travel to Europe, take me with you! Haha...)

Ups..So sorry Lam...I think I've made a mistake. You were visiting US last year.huehehe...Mata saya silap ^_^
How is the job hunting?

I guess there are much more you can update abt your travel LOL. I am only able to travel twice a year to different countries! Hope I have more chance! U.S am coming next year too~! =)

yeah hookah is fun. So how are u doign in the states?
oh yeah i'll def let you know if i go there, i still don't have my holidays yet

ohh u visited VN before? Yeah I'm from Hanoi. It is an awesome city.
And you're going everywhere in the states haha. have some fun and congrats on ur graduation.

Chirobie : twice a yr(overseas) to different countries are too much! unless you dont travel withing the country in that whole year =)

Air : ahaha, for me, it was `a day at the museums in Washington DC`

andy : ok keep me posted earlier about your trip here!

dukenht : yeah i have been to saigon, cantho and mekong river. so you are now in hanoi? ok you gotta be my guide when i lfy to hanoi someday!! i only went to new york, atlantic city, washington dc, los angeles, santa monica, long beach and san francisco =)

estrin : hey long time no see =) well i went to Europe already last year. would you like to go East Europe next time lol erm still job hunting now Chirobie : twice a yr(overseas) to different countries are too much! unless you dont travel withing the country in that whole year =) Air : ahaha, for me, it was `a day at the museums in Washington DC` andy : ok keep me posted earlier about your trip here! dukenht : yeah i have been to saigon, cantho and mekong river. so you are now in hanoi? ok you gotta be my guide when i lfy to hanoi someday!! i only went to new york, atlantic city, washington dc, los angeles, santa monica, long beach and san francisco =)