Well, i got a last minute call from the recruitment company on Monday and was informed that there were some Japanese speaking positions i could go for interviews. So i went to Singapore the next morning. I got offers from JGC Corporation, Shimizu Corporation and Tanaka Electronic Singapore with the position of Engineer, Site Engineer, and Sales Executive/Assistant Manager respectively. 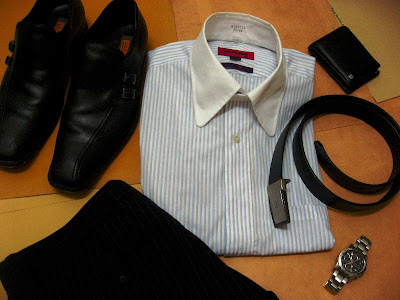 JGC is Japan`s first and top engineering contractor involved in the field of oil and gas development, energy plants and petroleum refining. Need to give them my reply by next week. Training in Yokohama will be provided. After that, will be based in Middle East for at least 6 months for the plant projects. 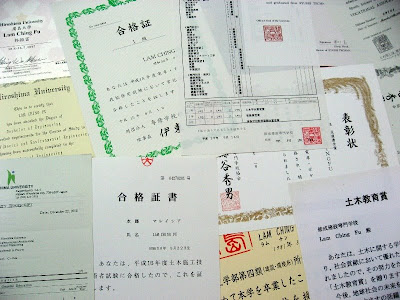 While Shimizu is a leading multi-national company that expertise in construction and architecture. The position they offered was not the cup of my tea. And the basic salary also not that attractive for a fresh Japanese graduate. 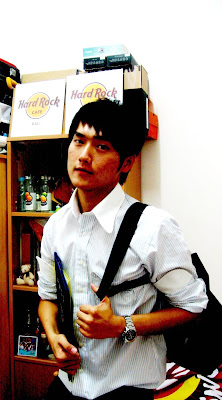 Tanaka is seeking a Japanese speaking graduate who willing to travel to UK, USA, Taiwan, Malaysia, Thailand, Philippines and Indonesia. Lots of allowances are given but i guess everyone could handle this job as long as he/she could speak Japanese. No challenge. 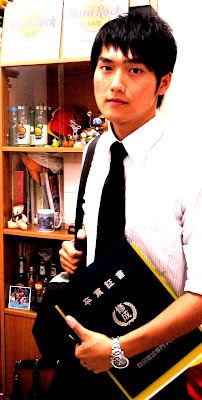 Alright, the interviews above were all done in Japanese. I however was well prepared with the English script i had practised several times. I once went blank when the HR lady said i gotta speak Japanese but luckily i was used to introduce myself whenever i went to the primary schools in Higashi Hiroshima City, thus, it wasnt a problem at all. Nevertheless, i was getting better questions after questions.

Anyhow i have to make up my mind by next Friday. And my mind keep telling me i would be most probably engaged by JGC. Although i wont be able to base in Singapore, training and experience in Japan and Middle East respectively would become my priceless asset couple of years later. Furthermore, JGC is one very potential stepping stone to get a yummy salary when i switch to another multi-national construction company in the future. I just need to check what are the benefits i would be given.

If I were u, I also prefer to work for company which involves in gas & petroleum businesses. Such company mostly earns huge profits and then will reward it employees handsomely. Well, good luck to u.

P.S. To reply ur question posted in my blog, yes, all the stories in my blog are real one & I wrote it myself, anyway i like to write those politic stuff but I guess not many ppl can understand it. Still undecided whether to accept the offer or not, aiya.. the salary & allowance not so attractive lei..
:(

rex : yoo... i have training in Spore for about a mth before heading to Yokohama, Japan for about couple of mths, and then base in the middle east from 6mths till 2/3yrs until the project finished =)

khoo : hahaha... i hope JGC would give us 6mths bonus or more every year =) but that is not the main reason i choose JGC, what i seek for is experience and a good stepping stone for my own future career =p

rex : yeah check my profile for it ok?

Congrats! Ah Fu 3 offers all at the same time. JGC will be the right choice,it really is priceless with overseas exposure even though you may not have the comfort when you are posted to middle east but what the heck, you have many years ahead of you to have everything.JGC is a big corporation with diversify business from chemicals, designing, R & D, oil & gas, construction and many offices overseas.You wil gained more then lose.

Sister Shen,
No lei, I just said in general ppl don't like to read politics stuff except our Mr. Lam (right or not?).

I had my Japanese final exam yesterday... and I couldn't remember how to say "expensive" in hinakana, so I wrote 贵. ha ha

shen : ahaha...bo liao!! my dream working in middle east disappeared =p sayonara... anyway now aim for another multi national company =) wish me luck! ok well, you should at least know who is prime minister, deputy, finance,,,etc at least when your foreign friends ask, you could proudly show them you are patriotic enough ok?

pd : sigh... i didnt accept the offer lor my friend!! need to sign contract and blablabla... misunderstanding between the agent and company...the problem once became so complicated but now all solved! perhaps i deserve a better one

khoo : i say, almost all of the girls are not interested in politics

tony : hahaha it should be 高い, well not only you most of the Chinese beginners tend to write the answer in Mandarin when they dont know the answer =) better than leave it blank =p

air : well i dont know why my hp cannot receive sms lah, i cant call also =( only able to receive call sia.... anyway you should call me

So do you already found other interesting jobs??? Good luck jobhunting!!!

What ever decision you make will always matter...just bear in mind to aim for the best always....

How's the interview at JGC S'pore?
Tough? I was called for interview at tmr morning as well. At first, I was told to be interviewed for Cost Control Engineer. Then...the manager changed his mind, changing the position to Project Engineer. OMG! I don't have any experience in this field. 怕怕...

irene : yeah they will provide training if they really wanna hire you, so dont worry too much, just do your best for the interview session, i was in the japanese speaking division, cant give you much advice though

cause i got the call from Aoki also...so funny...

Few denominations of Kerala opportunity to turn that unwanted jewelry into cash.Unlike many of their competitors, Cash4Gold works directly with a Acrylics, polyurethanes, polyesters, and epoxy are best. They have been wonderful to deal with, and have spent a lot of time teaching me the ins and outs of dealing ingold